Dobby is a Pinstripe Crested Gecko who I adopted about a year ago. He is just over 3 years old and his previous owner lost interest, so he came to me. As far as reptiles go, Crested Geckos are easy to care for, however, if you want to adopt a gecko, please make sure you do your research before taking one on. Inadequate care and husbandry can have huge detrimental effects on any animal, and many illness that exotic animals get can be avoided if the animals are cared for correctly to begin with. Never get a pet on a whim!

Crested Geckos are arboreal lizards, which means they like to climb, so a tank that is higher than wide is best for them. I use an Exo Terra that is taller than it is wide. I like these cages as they have mesh at the top to allow the air to circulate and there are two large doors at the front you can open.

They will need things to climb on, such as logs, cork bark and branches. By adding lots of branches, you can make the best use of the vivarium by utilising all the space. Your gecko will also need lots of places to hide – I use fake plants which allow plenty of oppurtunities to hide and climb. It’s up to you if you want to use real plants or fake ones.

Like Gremlin’s set up, Dobby has a natural looking, bioactive set up, with it’s own drainage system and plants. This mimics the geckos natural habitat and is easy to maintain. At the bottom of the tank are clay balls (Hydroleca) with a layer of hessian material on top to allow the water to drain. On top of the hessian layer is some Zoo Eco Earth – a sort of soil which allows me to plant live plants into. The plants will thrive due to the high humidity and can draw water from the hydroleca layer. Any organic waste matter is taken care of by the clean up crew (a team of tiny isopods, which break down any organic waste naturally), and everything else filters down to the bottom and is siphoned out periodically.

Dobby is a very shy little boy and spends the day hidden away behind his fake plants, but that doesn’t worry me and I don’t like to force animals to be friends if they don’t want to – as long as he is happy, I am happy! These lizards need to be kept around room temperature, but additional heating may be required in the winter months to keep them around 21-24 C. A heat mat or ceramic heat emitter can be used, just make sure it is connected to a thermostat to keep the temperature constant.

You may have noticed that Dobby is missing his tail as he dropped it in his previous home when a cat got too close to his tank. Crested geckos will drop their tail as a defence mechanism if they feel threatened as the tail drop will distract the predator and flop around, whilst the gecko runs to safety. Along the base of the tail are fracture planes, and the gecko can contract the muscles in front of this weak area causing the tail to detach itself. A missing tail won’t make much difference to the gecko and after a few days, they will learn to live without it. Crested Geckos are unable to regrow their missing tails and many keepers nickname tailless geckos as ‘frogbutts’!

Perhaps one of the most interesting thing about Dobby and Crested Geckos alike, is their ability to ‘stick’ to glass. In fact, Dobby’s favourite place to hang out is stuck to the glass at the back of his vivarium, behind a plant. He can scale the glass pretty quickly when he wants to, but doesn’t stick to my hand. This is because geckos need their feet to be at a certain angle to stick and will curl their toes to unstick which means they can  stick to glass, but won’t stick when walking on your hand. They are able to stick to surfaces because their toes are covered in ridges, which are covered with tiny hairs, known as setae. There are two possibilities of how the geckos stick to the glass. The first idea is that they are able to stick to surfaces via a thin film of water. Water molecules are polar, meaning their electrical charges are distributed unevenly, and therefore may stick to some polar molecules in their feet.

The second possibility is the Van Der Waals Force (named after the Dutch scientist, Johannes Diderik van der Waals) causes them to stick. If two things are to stick together, their surfaces need to be in close contact and at as many points as possible. The van der Walls force kicks in when their molecules become extremely close, and this produces an electromagnetic pull between the molecules as their electrons interact and their orbits adjust so they do not repel. Most surfaces will not naturally stick together, because on a microscopic level, they are not smooth meaning their molecules won’t come into contact in many places. When an adhesive is added between them, it will mould itself into all the spaces between molecules, meaning the range is close enough to allow the van der Waals force to take over. 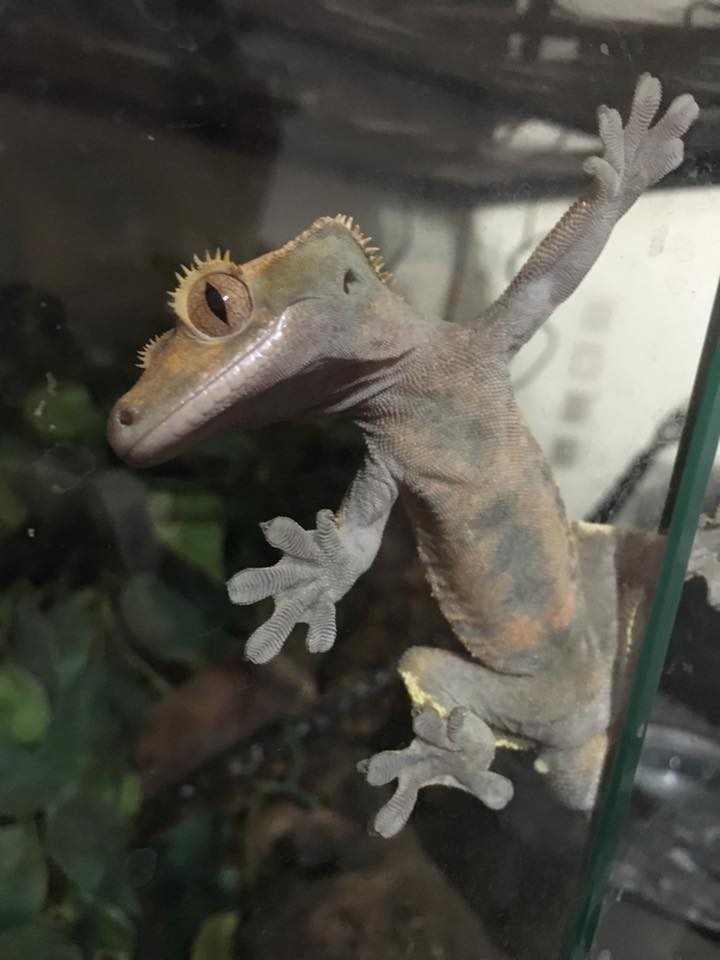 Crested Geckos need a varied diet to keep them healthy, but luckily you can buy pre-made gecko diets which are a powder that you mix with water. They come in a range of flavours, and we call them his smoothies! The mix stays in his cage for a day or two, and then it is changed. He also gets crickets or locust now and again, sprinkled with vitamins and this helps to keep him active as he has to hunt them. He has a feeding ledge, which attaches to the side of the glass with magnets as he prefers to eat up high. He also has a water dish in the feeding ledge and on the ground too. Crested Geckos need access to clean water at all times, and they require misting to raise the humidity in the tank. Some geckos prefer to drink from water droplets on the leaves, whilst others prefer to drink from a dish – I like to give Dobby the choice of both! 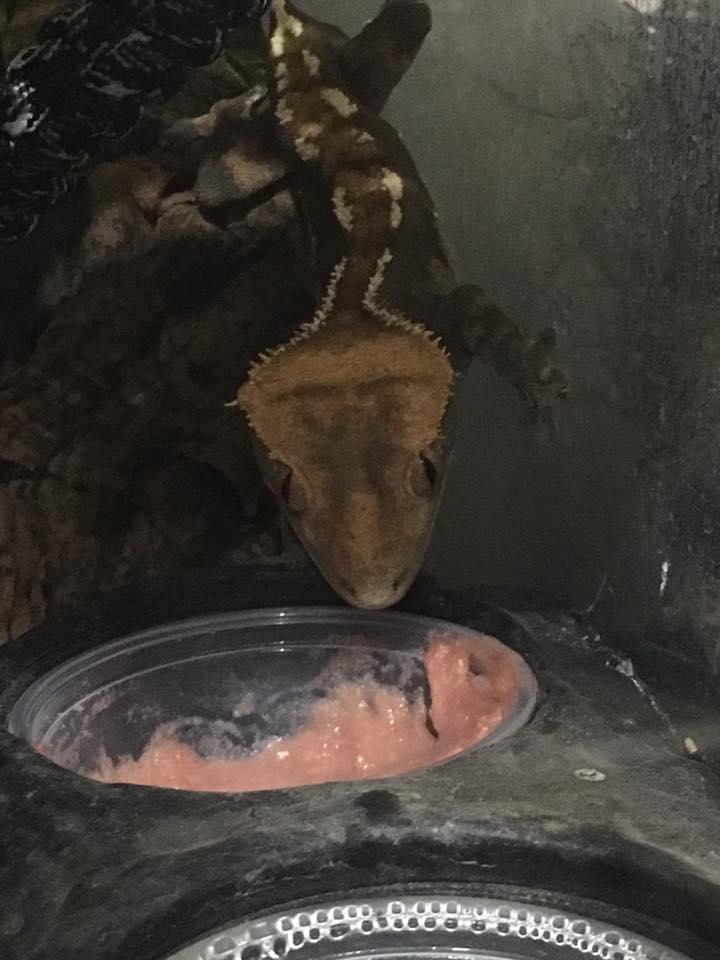 Although Dobby spends most the day hiding and only comes out late at night, he is a great gecko and is loved very much.

Volunteering for a rescue is hard work, read about my experiences here.